It’s true that we may be suffering from something we like to call the Dubai hangover, but let’s face it, dips in form happen to the very best of us. And in Steven George Gerrard MBE, we have one of the very best in football. Like an old poker pro, our current boss approaches the game with an analytical mind, keeping emotions in check, while having the tenacity to know when it’s time to go all-in. It’s the Stevie G mindset, and it’s having a profound effect on the squad and the club as a whole.

Gerrard has his share of critics, most of whom are Man United or Everton fans, who love to point out his lack of a Premier League winner’s medal. But that doesn’t mean that Gerrard lacks a winning mentality. His has a never give up approach that is as infectious as it is effective.

From dragging Liverpool through the group stage of their Champions League-winning season, to scoring that last minute equaliser in the FA Cup final the following season, Gerrard knows how to motivate. He was the leader that everyone wanted to please, and who led by example on many occasions. 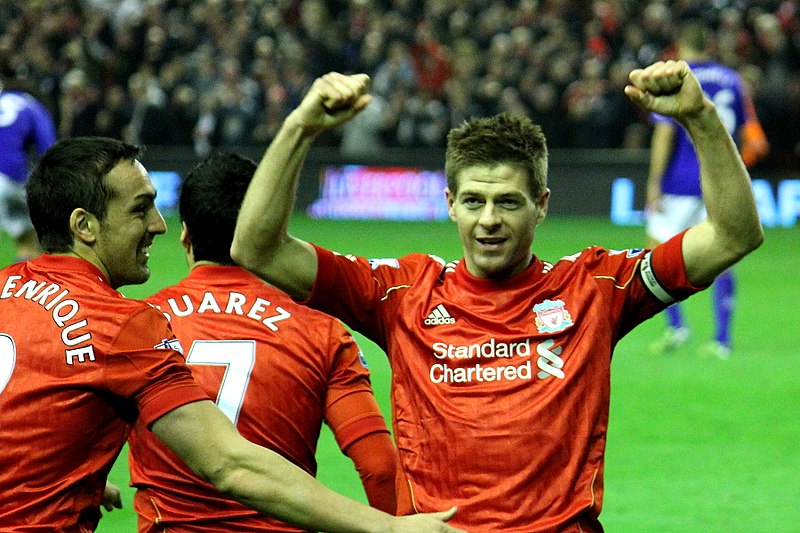 Gerrard was pivotal in convincing Suarez to stay at Liverpool

Gerrard’s role as captain at Liverpool had a huge effect on how he now works to motivate those around him. He’s a born leader and, if we believe the rumours, it was Gerrard who convinced Suarez and other players to stay at key points in their Anfield careers.

But it was when he took the reins of the U23 side at Liverpool that we really saw how Gerrard’s mindset had such a huge effect on those around him. Although the U23s were a formidable side already when he took over, the impact he had on the team was immense. Here was a European Cup winner taking the squad through its paces. The freedom with which the players now played was clear to see on the pitch and in their results.

That winning attitude was there for all to see, and it soon became clear that Liverpool’s hierarchy were grooming one of the greatest players in their history to take over from Klopp. Luckily for us, Gerrard didn’t have the same approach in mind. Like a poker player confident in his abilities, he decided to up the ante and move to a table where the stakes were considerably higher.

It might seem strange to assume that a player who was so blessed with skill would actually value a player’s mental strength as much as his physical prowess. But since becoming a manager, it’s clear that Stevie has placed a huge importance on the mental fortitude of those who play in the team.

This can be likened to the approach taken by a pro poker player. Anyone familiar with the game will understand that the mental side of poker is just as important as the actual skills involved. Not only does a poker player possess the skills for success, but they also know their limitations.

We’re not for a second suggesting that the boss is telling his players they aren’t good enough, but he certainly isn’t telling them that they’ve reached their peak. He knows that they have so much more to give but that they must understand that, like poker, football is a game where you are constantly learning. In fact, Stevie himself is still learning to this very day.

The most telling comparison we can make with the game of poker is learning from your mistakes, which is something that Gerrard is all too certain his players aren’t quite doing. In poker, a player sees every loss as an opportunity to learn; a chance to identify the weaknesses in their game and then work on them to ensure that they are no longer weaknesses at all.

Gerrard was quite damning in his post-match press conference, stating that both he and his staff have held the hands of his players both on and off the field since he took the helm. His statement suggested that the players are failing to learn from their mistakes as they blow hot and cold, frustrating both the coaching staff and the fans.

Of course, the way Gerrard approaches it is nothing like the way the likes of Mourinho has done at all of the clubs he managed. Gerrard is not throwing the players under the bus, but trying to motivate them to achieve greater things. His frustration is one of a born winner. A man who knows that the players under his stewardship have the skills to compete at the highest level, and bring silverware back to a club that has missed out on so many occasions in recent years. But he knows that this cannot be done without adopting a certain mindset. An approach that the ‘proper footballing man’ might call ‘leaving everything on the pitch’. Do this, and they just might hit those dizzy heights that their manager believes they can easily reach.

In Steven Gerrard we have an incredible manager. A man who believed in the vision of the club and who bought into the Rangers dream. But we also have a manager with a clear vision of where he wants us to be, and who will let nothing stand in his way as he strives to achieve his goals.

Going back to the poker analogy one last time, Stevie G has gone all-in with Rangers, and now it’s time for the players to go all-in with him. The Stevie G mindset has already seen us improve ten-fold. Now let’s hope that he can find that momentum once again and put this club back where it belongs.